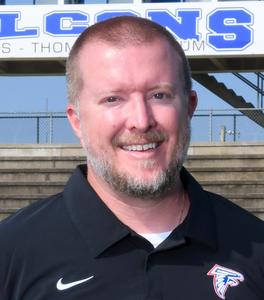 Eddie Cunningham has been named the next head coach of Falcon Football at Lincoln County High School for the 2022 season. The announcement was made to the players during Christmas break.

The move makes Cunningham the sixth coach to lead the program since the school was established in 1979. Cunningham brings 17 years of coaching experience to the system. Most recently, Cunningham served as the interim head coach for the Falcons taking over at midseason.

Before becoming head coach, he spent the last four years working with the Falcon football team in various roles serving as offensive coordinator for the 2018-2019 football seasons and defensive back coach in 2020-2021.

A native of Lincoln County, Cunningham attended Richland High School in Giles County where his parents were teachers for 18 years. He attended and played football at Bethel University in McKenzie where he received his teaching degree in history and his Master's in Administration and Supervision. In addition to his role as head football coach, he also serves as assistant principal at LCHS.

He and his wife Erinn, who is a third-grade teacher at Unity School, have two children, Reese and Heath.

"I'm looking forward to leading the Falcons and I very much appreciate the opportunity I've been given," Coach Cunningham said. "There's a lot of work to be done and we're going to get after it.

"The program has to restore confidence and pride to itself and the community," he added. "The only way to do that is through hard work both on and off the field by the players and staff. We're going to do everything we can to see that happens."

In 2008-2009 he served as offensive coordinator and head baseball coach at Cannon County.  He earned Region Assistant Coach of the Year during the 2008 football season.

From 2010-2011 he coached outside linebackers and running backs at Riverdale in Murfreesboro. The Warriors made the semifinals versus Maryville in 2010 and the quarterfinals versus Siegel in 2011.

He then spent five years as the offensive coordinator at Fayetteville High School before coming to LCHS in 2018.

"The Falcon football committee worked countless hours on the selection process for the head coach position," LCHS Athletic Director Jeff Bell said. "They did an excellent job in the selection of Eddie Cunningham to fill that role. He has an excellent work ethic and a plan for rebuilding the Falcon Football program."

"Coach Cunningham is bright, young, energetic, organized, and enthusiastic in his work," said LCHS Principal Billy Owens. "With the support of the players, staff, parents, and community, Falcon football will bring the excitement back to 'The Pit' very soon under his leadership."

"I'm excited about him taking over the program," veteran coach and former LCHS Athletic Director Louis Thompson said. "He has a plan to get Falcon football back to being a great program and I'm looking forward to some great nights in 'The Pit'."

Committee member Johnny Collins said Cunningham understands the history and prestige that is tied to the Lincoln County Falcon. "I believe he brings the passion, knowledge, work ethic, and integrity to rebuild the program back to that level again," he said.

"Coach Cunningham is a great man who exemplifies the role model our kids need to have to lead them," said committee member Ley Jean.  "I have confidence he will work hard and instill in our Falcons the culture of being a disciplined football team both on and off the field. He has a long-term vision for the program and it's going to be fun watching it play out."

Committee member Coach Don McNeese said, "Coach Cunningham is very qualified as he served as interim head coach and has been offensive coordinator in the past. We look forward to his rebuilding efforts."

"The enthusiasm, dedication, and desire of Eddie were evident during the process of selecting the next head football coach at Lincoln County," said committee member John Richardson. "I have full confidence that he and his staff will work hard to develop young men of character on and off the gridiron. I'm confident the people of Lincoln County will support his desire to win and excel as he and his staff work to restore respect to Falcon Football."

"I believe Coach Cunningham's vision for Falcon Football will have a great impact on Lincoln County student-athletes for years to come," said committee member Nathan Browning.